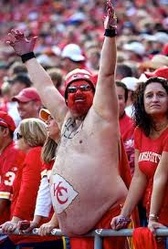 Antonio Callaway, WR. Just what the Browns need, a WR who failed a drugs test at the combine and has had a few other issues. Just what Josh Gordon Needs for company.
_________________

I think this thing with the anthem is nonsense. Should be scrapped altogether. Growing up in Europe, we are used to it happening in football internationals but apart from the FA Cup Final (do they still do it?) for domestic games, forget it.
_________________

@GBDawg1 wrote:I think this thing with the anthem is nonsense. Should be scrapped altogether. Growing up in Europe, we are used to it happening in football internationals but apart from the FA Cup Final (do they still do it?) for domestic games, forget it.

As some rational people have said in America, if you want the anthem respected, they better not sell beer or anything else during the anthem either.

It’s a joke anyway, just play the anthem and let people get on with doing whatever they want. Sometimes I sing God Save The Queen, other times I don’t.
_________________
Owner of the Jacksonville Jaguars on Madden 18

Well, a first for me with the Bills yesterday.

@dbatch2 wrote:Been a very long time... lol but what a pick by the dog pound.. I'm a huge Oklahoma fan. And this pick may have me buying a browns Jersey next season GBDawg

I'm not so sure Daniel.

I think Mayfield could end up being the real life Bo Callahan.

The Bo Calllahan era has begun. And boy, did he light things up after he came on.

hell has officially frozen over

Too late for his Madden rating though

Message for Isaiah Crowell: Up Yours, you disrespectful turd.

Was Crowell quite disrespectful with his departure from Cleveland?

Crowell better get ready for a fine. The second score where he rubbed the ball on his backside and then threw it into the stands will cost him.

So, we're down to the final four teams. Who does everyone have to win the big one?

Despite my loyalty to Philadelphia, I cannot say that we deserved to advance after last night. To be up 14 in New Orleans and allow them to get back into the game, unacceptable. However, they got a lot further than I ever thought they would this year. I am proud of their progress. Had they not suffered so many injuries then who knows how far they could've gone. If Nick Foles has played his last game, then I will be sad to see him leave, an Eagles legend forever.
_________________
Madden 18
Season #1: Seattle Seahawks 5-11, 3rd NFC North
Season #2: Seattle Seahawks 12-4, 2nd NFC North
(Superbowl 35 Runner-up vs New England Patriots - Matty)

Patriots should be favourites because of their experience in the post-season. Brady also looks better than ever. However, Chiefs I think will provide a more stern challenge than the Chargers did.

So the Super Bowl is set

Who we going for?

I think Patriots will win it quite comfortably to be honest, its probably a couple of years too soon for Goff and the Rams
_________________
Owner of the Tampa Bay Buccaneers!!

I think you're right, Dap. But I hope you're wrong! The Rams will need a lot more from Todd Gurley to beat the Patriots.

If there is a football God (and I'm not sure after the officiating this weekend) then the Rams will get revenge from that little thing called Spygate. You might have heard about it somewhere? Lol

I actually want the Patriots to win it now. The Rams shouldn't even be there. The non-call when the Saints should have got a PI penalty was disgraceful. Those officials cost numerous players what may well be their only chance to appear in a super bowl. Not the Rams fault of course and too late to correct a wrong decision, but the rules need to be changed so that these things can be challenged.